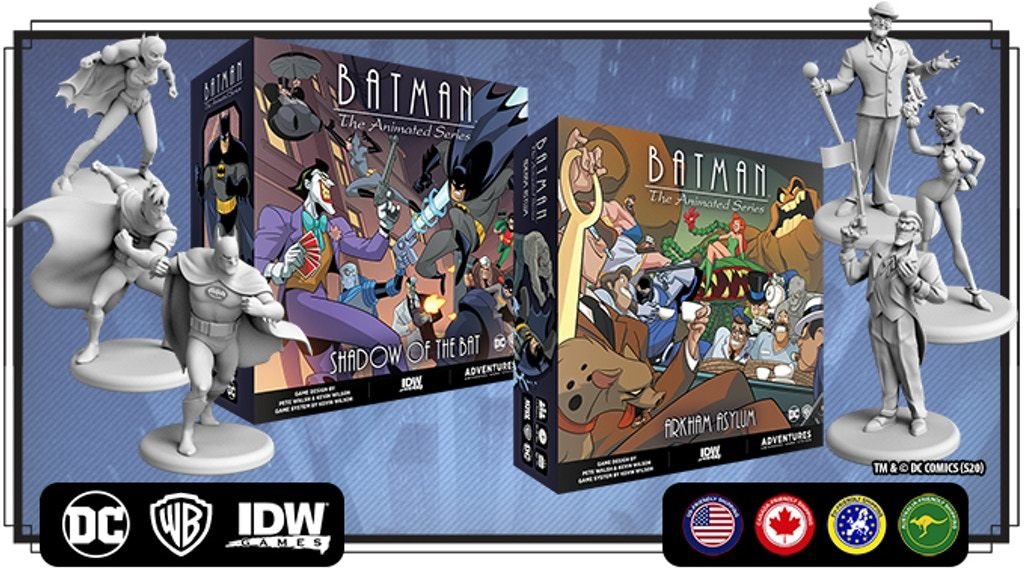 Can I pledge for $1 and upgrade to a full pledge in the BackerKit later?

Yes. We expect to have the Backer Kit open for at least a few weeks after the campaign ends. You’ll be able to upgrade your pledge during that time.

Is this game compatible with the TMNT Adventures games like Change is Constant and City Fall?

Yes! All games in IDW’s Adventures Universal Games System (AUGS) are cross compatible. While each franchise has its own flavor and gameplay additions, the core mechanics are all the same and all the miniatures are in the same scale (heroic 32mm). Heroes, Map Tiles, Tokens, and AI Villains can be moved between products freely. Use the Arcade Battles at the end of each Mission Book to create your dream match ups!

Can I just buy one of the smaller boxes Character or Story packs without pledging for the two higher tiers?

Yes. Just back for the product’s cost and then add that product to your cart in BackerKit once the campaign is over. Shipping numbers for the non-pledge tier items will be available in BackerKit as well.

I don’t want to miss out on this campaign, but I don’t feel comfortable backing before my TMNT Adventures pledge arrives in the mail. What should I do?

While TMNT Adventures has delivered to many of our backers by this point, we know that there have been shipping delays for our backers in Europe, Canada, and Asia. You can back for $1 and upgrade your pledge after the campaign, but regardless of the eventual timing, we will make sure that all TMNT backers have a chance to back BTAS after they’ve received their TMNT product, even if that somehow extends past the end of the campaign or the BackerKit closing. We appreciate all of your patience and will make sure everyone that no one is left behind on this Adventure!

I missed out on last year’s TMNT Adventures campaign; will there be a chance to buy the All-the-Loot bundle from that campaign?

Is Catwoman playable as a hero or a villain?

Both! The Shadow of the Bat box contains all the components needed to play the capricious Catwoman as a full-fledged Hero, including her 3 unique Action Dice, as well as everything needed to be played as an AI or a 4v1 Villain character.

What is the purpose of the Villain Upgrade Pack?

It allows you to play the villains as hero characters. It contains four sets of “Rogues Gallery” Class Dice, which can be used with any of the included characters, Hero Sheets, and Hero Skill cards for the following villains: Two-Face, The Joker, Harley Quinn, Mr. Freeze, Poison Ivy, The Riddler, The Penguin, Scarecrow, Killer Croc, and Jervis Tetch. It also contains Cooperative Villain Sheets for the Bat Family to give the villains someone to fight against!

Why would I want to purchase additional Villain Dice from the Add-on Menu?

While the Villains Upgrade Pack comes with enough dice to run a full 4-Hero team, some players may want to have additional sets available for larger Skirmish Mode matchups or to allow multiple characters to use the same class of dice simultaneously. For example, if you wanted to use the Assassin dice with both Poison Ivy and The Riddler at the same time, you’d need one extra set of the Villain Dice. Otherwise, you can still use the Assassin dice with Poison Ivy and either the Brawler, Bruiser, or Wildcard dice with The Riddler.

BackerKit is a service that crowdfunded project creators use to keep track of hundreds to tens of thousands of backers—from shipping details, pledge levels, preferences and quantities, whether they have paid or had their card declined, special notes, and everything in between!

The BackerKit software and support team is independent from the campaign’s project team—BackerKit does not handle the actual reward shipping. For more information about the preparation or delivery status of your rewards, please check the project's updates page.

How does BackerKit work?

After the campaign ends, the project creator will send you an email with a unique link to your survey. You can check out a walkthrough of the process here.

I never received my invitation. How do I complete the survey?

The most common reasons for not receiving a survey email is that you may be checking an email inbox different from the email address you used to sign up with Kickstarter, Indiegogo or Tilt Pro account, or it may be caught in your spam filter.

Confirm that the email address you are searching matches the email address tied to your Kickstarter, Indiegogo, or Tilt Pro account. If that doesn’t work, then try checking your spam, junk or promotions folders. You can also search for "backerkit” in your inbox.

To resend the survey to yourself, visit the project page and input the email address associated with your Kickstarter, Indiegogo or Tilt Pro account.

How do I update my shipping address?

When will my order be shipped, charged or locked?

That is handled directly by the project creator. BackerKit functions independently of the project itself, so we do not have control of their physical shipping timeline. If you want to check on the project’s status, we recommend reading over the project's updates page.

I completed the survey, but haven't received my rewards yet. When will they arrive?

As BackerKit does not actually handle any rewards or shipping, the best way to stay updated on the shipping timeline would be to check out the project's updates page.